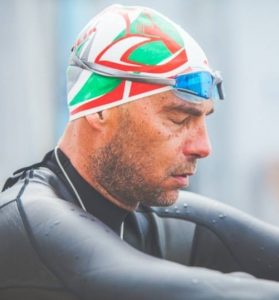 He was born on April 20, 1972. From the age of 7 he was involved in competitive swimming with the team of A.O.A (Athens Athletic Club). He is a graduate of the National Kapodistrian University of Athens, in Sports Science. From a very young age he was involved in snorkeling & spearfishing and later more actively in free diving. In 2011 he obtained the diplomas Open Water Diver and Advanced Open Water Diver in scuba diving, with the diving school “VYTHOS” of Antonis Seitanidis.

In 2017 he completed his education as a third level student of Apnea Academy. The first and second level next to Roberto Calich (the largest free diving school in Greece at that time). The third level with Onebreath Freediving, next to Dimitris Koumoulos. In 2018, he will complete, both his theoretical and practical training as an Apnea Academy Assistant Instructor. He considers both Roberto and Dimitris as his mentors. This is how his semi-professional free diving career begins.

He is a member of AIDA Hellas since 2017. He participates uninterruptedly at pool and depth championships with several distinctions. In 2017-18 he was elected at the board of AIDA Hellas as secretary (for a short time) from which he resigned in 2018 for personal reasons.

He has a diploma in Rescue & First Aid and use of external defibrillator from the world-renowned organization RTI (Rescue Training International). He has participated in many free diving competitions as a safety diver (pool & depth safety diver).

– Participation at the Panhellenic pool championships of AIDA Hellas in 2017, 2018.

– Participation at the Panhellenic depth championship of AIDA Hellas in 2017.

– Participation at the Panhellenic pool championship of CMAS – EOUDA in 2020.

– 2nd place in dynamic apnea without fins (DNF) in the category of newcomers.

– 3rd place in static apnea in the category of newcomers.

Onebreath Freediving is based in Athens, Greece. Our goal is to provide high quality Educational and Training services to Freedivers and Spearfishers in Greece and abroad.